The danger signs are everywhere. The arrogance and authoritarianism of the ruling African National Congress (ANC) is growing – endangering South Africa’s fragile democracy – even while the country prepares for the 2014 elections. The ruling party’s refusal to be accountable is clearly evident in the cavalier manner it has dismissed the report of the Public Protector on the building of President Zuma’s palatial complex in Nkandla in the midst of the poverty and destitution of the local community.


Its arrogance is evident in the assertion made by the president that only the ANC will govern – no opposition party in his view will take over the mantle of governance. That such a statement can be uttered suggests the president is deluded given the high levels of dissatisfaction amongst ordinary people against the ANC – the service delivery protests wracking the country is but one indicator. Various polls, too, suggest that the ANC might well receive less than 60 percent of the vote. More worrisome for Zuma is the fact that there is growing dissatisfaction with his leadership by rank-and-file ANC members. This was dramatically illustrated with him being publicly humiliated when he was booed whilst in the company of world leaders at the memorial service of the late Nelson Mandela.

But the stakes are far higher than the plummeting popularity of the worst president we have had this past twenty years. The brutality of the state’s response to popular protest was clearly evident in the townships surrounding Brits with three people killed following weeks of not having water in the midst of a heat wave. This brings back the nightmare of Marikana as well as the killing of Andries Tatane in Ficksburg during protests there. Increasingly we are witnessing a state at war with its citizens as people take to the streets in ever-greater numbers and frequency on account of the gross incompetence of the state apparatus in meeting their basic and legitimate demands for water and the like.

The crisis of the state in not being able to meet the needs of its citizens also illustrate something else too – the intellectual poverty of the ANC in not having any workable solution to fix the state and society and the moral bankruptcy of the ANC leadership in stemming the tide of corruption which is bleeding state coffers dry. Tender-rigging and the deployment of incompetent cadres to senior positions of state has become the norm during the Zuma administration. In this context, it is impossible to believe the president when he recently ranted against corruption. If he is serious, why not start with Nkandla or his close relationship to the Guptas? Or for that matter when exactly is the terminally ill Schabir Shaikh supposed to die whilst playing golf and hurling abuse at journalists and the like?

The crisis of the state is however intimately related to the self-delusions of No. 1. After all, who in his right mind, would announce the creation of millions of jobs as part of the ANC’s election manifesto when our manufacturing sector is actually shedding jobs, when millions of unemployed youth do not have the necessary skill sets to partake in the formal economy, and when government and its tripartite allies are actually creating an environment which is not friendly to business? Who, in his right mind would talk of creating millions of jobs when Europe, our largest economic trading partner is beset with economic woes? Who would talk about the creation of millions of jobs in South Africa despite the lacklustre performance of the US economy and the slowing of the Chinese and Indian economies?

Our democracy is in peril. As the ANC is unable to demonstrate on its grandiose election promises, the gap between promise and performance will increasingly become evident to ordinary citizens and street protests will become ever more violent resulting in even more brutal action on the part of the ruling ANC. This, in turn, will strengthen the hand of the securocrats within the ANC government resulting in a more authoritarian state. This is the future which awaits us with the ANC in government and Zuma at the helm of state. God help us all!

*Dr. Hussein Solomon is Senior Professor in the Department of Political Studies and Governance at the University of the Free State.
投稿者 Admin 時刻: 10:44 PM 0 コメント

The SACCPS is proud to announce the release of volume 2, number 1 of Southern Africa Peace and Security Studies. The journal can be accessed freely online, with the journal as a whole, or individual articles available for downloading. 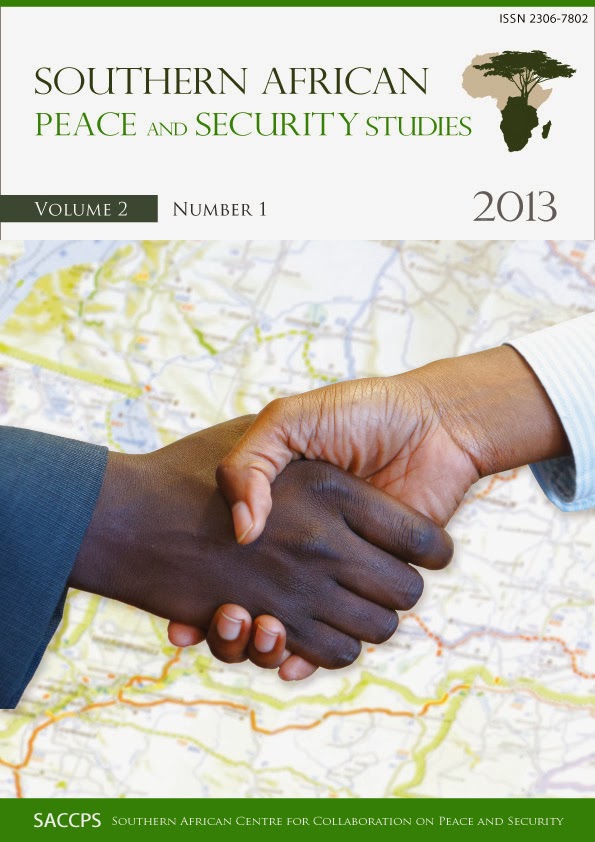 The issue contains two other full papers: one on political risk in South Africa by Theo Neethling; and another on Japan and peacekeeping operations in the region by Rui Faro Saraiva. There is also a policy brief on the DRC peace process by Gerrie Swart, followed by some book reviews.

We expect to release volume 2 number 2 by March 2014, and will be accepting submissions for volume 3 number 1 up until 15 April 2014. We publish academic articles, policy briefs (practitioners are welcome), and book reviews on any topics related to peace and security in the southern African region (interpreted broadly). Please see the journal homepage for details on preparing a submission.