Thabane Back in Power in Lesotho: Hope or Despair for the Kingdom?

by M. K. Mahlakeng
All Basotho Convention (ABC) leader and former Prime Minister, Thomas Thabane, has returned to power. This is following 3 June 2017 elections which came at the background of a no-confidence vote in Prime Minister Pakalitha Mosisili and his seven-party coalition government. This no-confidence vote led to the dissolution of the ninth Parliament in Lesotho on 6 March 2017. Dissolving parliament was one of two options PM Mosisili had at the face of the success of the motion. Contrary to this, the PM would have had to resign as PM and allow for his party deputy to lead the Democratic Congress (DC) - a leading partner in the 2015 coalition government- in Parliament and subsequently becoming the PM. However, opting for the dissolution of parliament meant that an election date must be announced. As such, elections should be held within a period of three months of the dissolution.

The outcome of the results saw Thabane leading the race despite failing to gain an outright majority thus forcing him to form a coalition government with other political parties (i.e. Alliance of Democrats (AD), Basotho National Party (BNP) and Reformed Congress for Lesotho (RCL)). This sees the formation of the third coalition government in Lesotho in just five years (i.e. 2012, 2015 and 2017 respectively). Following the 26 May 2012 elections, Lesotho witnessed its first ever coalition government. This pact comprised of three political parties i.e. the All Basotho Convention (ABC), Basotho National Party (BNP) and Lesotho Congress for Democracy (LCD). 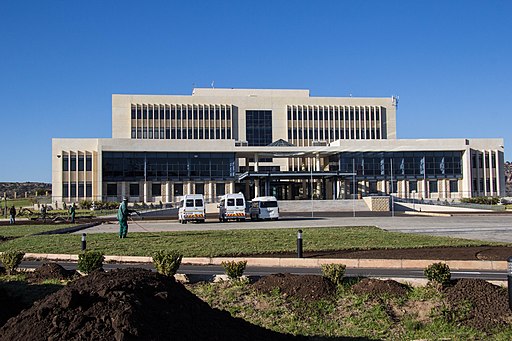 This coalition government collapsed only two years in office as a result of poor leadership, and tensions and misunderstandings that occurred between coalition partners (especially between the ABC and LCD). This collapse of government led to the 28 February 2015 general snap elections which resulted in a second coalition government comprising of seven parties, i.e. the Democratic Congress (DC), Lesotho Congress for Democracy (LCD), Marematlou Freedom Party (MFP), Basotho Congress Party (BCP), National Independent Party (NIP), Lesotho People’s Congress (LPC) and Popular Front for Democracy (PFD). Following the 3 June election in 2017, Thabane’s ABC combined its 48 seats with the AD’s 9, BNP’s 5 and RCL’s 1, thus enabling them to pass the 61-seat threshold required to form government in the 120-seat National Assembly (NA).

However, in just two days before Thabane’s inauguration, his estranged wife, Lipolelo Thabane, was shot dead on Wednesday 14 June at about 6:40 pm as she was about to enter her premises. Thabane and Lipolelo had been living separately since 2009. Subsequent to this was a divorce filed by Thabane in 2012. However, Lipolelo, through legal measures, never stopped pushing for her privileges as first lady.

In mid-January 2015, the High Court of Lesotho rule that “Lipolelo Thabane is the country’s official first lady and should be immediately afforded all benefits she is entitled to including a Chauffer driven government vehicle and a bodyguard”. This judgement appeared to be a major setback for the PM’s partner and current wife MaIsaiah Thabane, formerly known as Liabiloe Ramoholi whom Thabane customarily married as it effectively did not recognise her as the rightful wife of Thabane and first lady.

Nonetheless, the inauguration of PM-elect Thabane went ahead as scheduled on 16 June despite security claims, uncertainties and tempers flaring over the killing of Lipolelo. It is however still not clear on the actual cause of the assassination of Lipolelo Thabane. Nonetheless this hasn’t deterred people from either connecting the killing to PM-elect Thabane and his current wife who are seen to have had a lot to lose in the existence of his former wife post inauguration; or, to the outgoing government who it is perceived to cause instability in the country following their defeat in elections.

It must be noted however that, the PM, the Tranformation Resource Centre (TRC), Christian Council of Lesotho (CCL), and other development partners have been silent on the killing of Lipolelo Thabane. This is contrary to their firm role in high profile assassinations, human rights violations and other security breaches in Lesotho. And the subsequent continuation of the inauguration further exacerbates these claims and uncertainties.
投稿者 Admin 時刻: 5:07 PM 0 コメント