Lesotho: A Fight Against a Mutiny Attempt

Since May 2015, following the reinstatement of Lieutenant General Tlali Kamoli as the commander of the Lesotho Defence Force (LDF), there have been rumours of a plot to overthrow the army leadership. And subsequently, there has been an ongoing operation to probe a suspected mutiny in the army in line with the LDF Act of 1996. According to Major Bulane Sechele (Operation Commander), “the LDF conducted a special operation after it uncovered a mutiny plot by some of its members”.

As a result, a number of events unfolded. These includes the detaining of 56 soldiers implicated in this plot; the fleeing of the tripartite (ABC, BNP, and RCL) opposition party leaders to South Africa; and, the demotion and later killing of the former LDF commander Maaparankoe Mahao. All of which are implicated in this plot. First, from the 14th May 2015, the army has been making arrests of soldiers allegedly involved in the mutiny within the LDF. Fifty-six soldiers have been detained at the Maseru Maximum Security Prison for allegedly being part of a plot to overthrow the army leadership. 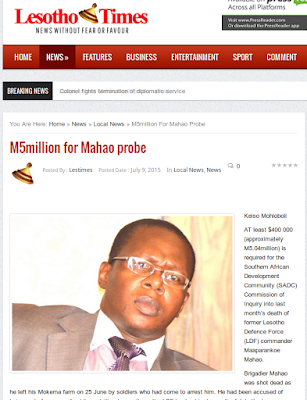 Second, tripartite opposition (All Basotho Convention (ABC), Basotho National Party (BNP) and Reformed Congress for Lesotho (RCL) leaders (former PM Thomas Thabane, Thesele ‘Maseribane and Keketso Rantšo) have fled Lesotho to South Africa on the 11th, 13th and 26th May respectively. On the one hand, this was amidst claims over security concerns that they had been alerted of a plot to kill them by the LDF. On the other hand, it has been argued that they have fled Lesotho because of their alleged role in the mutiny. However, both these claims respectively have not yet been accompanied by tangible proof.

Third, on the 29th August 2014, Brigadier Maaparankoe Mahao was appointed as Lieutenant General and LDF Commander. This was following the sacking of Tlali Kamoli as LDF commander due to claims of an August attempted coup against former Prime Minister Tom Thabane’s coalition administration.

On the 21st May 2015, two and a half months after the defeat of the then PM Thabane’s coalition by the current coalition led by PM Pakalitha Mosisili in the 28th February 2015 general snap elections, Mahao was removed as head of the LDF and demoted from Lt General to Brigadier. Mahao’s appointment as LDF commander was argued by government as illegal due to the failure to follow due process hence the demotion from Lt General to Brigadier and removal as LDF commander. Government then declared Lt Gen. Kamoli as a rightful LDF commander.

Subsequently, during the same operation by the army to probe a suspected mutiny, Brigadier Mahao was shot dead on the 25th June 2015 during a shootout. The Military and the Defence Minister Tšeliso Mokhosi through their statements respectively have indicated that “the former commander was resisting arrest and there was an exchange of gunfire which subsequently led to his killing”.

These events ultimately led to a SADC Extraordinary Summit of the Double Troika in Pretoria. On the 3rd of July, SADC held an Extraordinary Summit of the Double Troika following concerns over the security situation in Lesotho and the killing of Mahao. The Summit endorsed PM Mosisili’s proposal that a Commission of Inquiry be established to look into these security issues. This proposed Inquiry will be three folded. Firstly, The Inquiry is expected to look into the circumstances surrounding Mahao’s murder. Secondly, the Inquiry is also expected to look into the events that led to the alleged 30 August attempted coup against former PM Thabane’s coalition government. And lastly, The Court Martial to try LDF suspects for alleged mutiny would be suspended during the Inquiry period.
投稿者 Admin 時刻: 8:18 PM