Japanese media and the lack of coverage of African news

The poor accessibility to remote areas of conflict, as well as the safety concerns of journalists certainly play a role. However, it might also be useful to look at the number of overseas bureaus in the region. For example, it appears that the Yomiuri Newspaper – a Japanese newspaper with the largest circulation, has only two news bureaus in Africa – one in Johannesburg, South Africa and one in Cairo, Egypt(*2). However, the bureau in Cairo focuses more on the Middle East than on Africa itself. That means that there are at most only two agencies to cover the whole continent: a continent, which is in fact the second-largest in the world. At the same time, there are nine Yomiuri bureaus in Europe alone. It reveals that there is a certain imbalance in how Japanese media cover different parts of the world. Moreover, it suggests that Japanese media in particular perceive African countries as not worthy of detailed reporting.

Consequently, many potentially significant events in Africa fail to reach the Japanese public. Therefore, it is interesting to analyze the content of the Yomiuri Newspaper articles and see, if African events are covered, what is being covered? The following table shows the total number of characters devoted to African news in the Yomiuri Newspaper over the year 2015 (1 January to 31 December). The list represents the top ten of the most covered countries and the total number of characters devoted to them.


Nigeria and Kenya received the most attention, with 49 and 24 articles respectively reporting on a complicated security situation in both countries. That is hardly surprising, considering the number and intensity of attacks by Boko Haram, an Islamic militia in Nigeria, and Al-Shabaab, an Al-Qaeda affiliate from Somalia which mainly carries out its attacks in Kenya.

However, a closer look at the content of articles reveals that the coverage of conflict and terrorism in Africa cannot be called extensive or detailed. Out of 49 articles primarily devoted to Nigeria, around 29 are short columns within 200 characters, which simply state the place, perpetrators and number of victims. They do not offer a broader analysis of the situation. Moreover, follow-up stories after initial reports on attacks are rare. For example, only 3 Yomiuri articles with a total of 1,923 characters focused on the deadly Al-Shabaab attack on a Garissa University campus in Kenya, which took the lives of 148 people. This number looks especially insignificant next to 26,467 characters (or 18 articles) written by Yomiuri about the November attacks in Paris just in the first two days. Although these are two different cases, the comparison definitely emphasizes the lack of attention to African affairs.

Overall, six countries in the list are related to conflicts: Nigeria, Kenya, Somalia, South Sudan, Libya, and Algeria. The focus on a security issue is clearly demonstrated in the following chart of most covered topics in the newspaper. Conflict-related articles make up around 39 percent of the whole coverage. Such attention can be explained by the intensifying insurgency of Islamic militia around the world and its direct consequences in Europe and Japan (e.g. the beheading of two Japanese nationals by the Islamic State in October 2014). 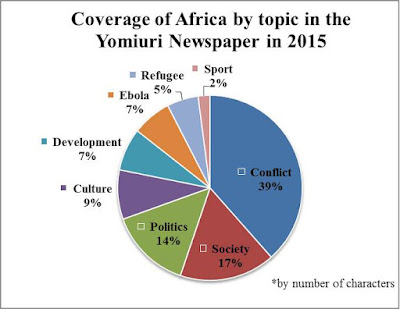 Some other topics that gained substantial coverage were “society” and “politics”. News about presidential elections in Nigeria and Burkina Faso, Obama’s visit to Africa, and visits to Japan by African diplomats, all fall under the category of “politics”. It makes up 14 percent of the total coverage. Articles discussing human rights improvements and other public affairs are categorized as “society” and constitute 17 percent of the news. Although this might suggest that Japanese media show a certain level of interest in African society, in reality 47 percent of such articles (or 16 out of 34) are news related to both, Japan and Africa. They might as well be labeled as Japanese news. For example, one article focuses on how Japanese style-management can improve the working environment in African companies, while other articles focus on a great contribution by the Japanese International Cooperation Agency (JICA) to the development of living standards. In other words, a connection to Japan seems to be a significant factor in whether society-related news would receive attention of Japanese media.

The same can be said about African news in general, as 23 percent of all articles published in 2015 by Yomiuri were written in the context of a connection to Japan or Japanese people or organizations, as can be seen from the following chart: 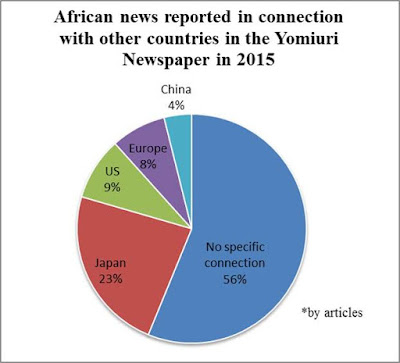 This brief analysis of a Japanese newspaper reveals a few interesting aspects of how Japanese media deal with Africa. First, within the little coverage devoted to the continent, conflict-related news attracts the most attention. However, “the most attention” should not be confused with “much attention”, as even the worst atrocities by Boko Haram and Al-Shabaab are not nearly as covered as attacks on Western soil and consequently are deprived of a chance to compete for the reader’s empathy. Certainly, given the context of the emergence of IS, the security concern is not specific for Japan and is rather an international issue. At the same time, when it comes to other issues with global impact such as Ebola or the refugee crisis, it seems that unless the issues threaten to cross the Japanese border, the Japanese media will look the other way.

The economic woes of the world's second largest economy and Africa's largest bilateral trading partner – China – are causing alarm throughout the globe, with Africa not spared the turmoil. The plunging stock markets and the devaluation of the Yuan has increased concerns by most African countries, regarding the effects on the demand for oil, gold, copper and other resources, as the devaluation is depressing global commodity prices.

More than 25 percent of sub-Saharan Africa's exports go to China. Countries that have China as the major export destination, predominantly resource rich countries such as Zambia, Angola and South Africa, have endured the brunt of the economic shock. Other countries that receive colossal FDI inflows from China such as Nigeria, Ethiopia, Kenya and Uganda have also been seriously affected by the shock. More than half of the world’s worst performing currencies for 2015 are from Africa.

Zambia is one of the countries heavily dependent on resources exports, which include copper and cobalt, with China the major export destination. Because of its reliance on copper exports, (70 percent of export earnings are from copper), coupled with a weak Chinese economic growth and low commodity prices, the Zambian currency, the kwacha, has depreciated by more than 40 percent in 2015. The depreciation has prompted the government to continuously intervene in the foreign exchange market, resulting in declining foreign reserves and a widening current account deficit. The weaker kwacha has made imports expensive for the import dependent Zambia, while the dwindling copper and other precious metals' prices have made the balance of payment situation worse for Zambia. Inflation has risen to 21.1 percent as of December 2015, the highest in 10 years, which averaged 9.46 percent between 2005 and 2015.


In addition, a pocked-sized manufacturing and energy sector in association with poor economic diversification and a continued widening current account deficit has posed a challenge for the Zambian governments efforts to contain the economic shock. Copper mines have been hit the most by the economic shock and the power shortages resulting in reduced production and closures for some, and laying off workers. More than 5,000 jobs have been lost in the mining sector in 2015, most notably at Mopani copper mines and Luanshya mines. Government is reviewing the mining tax regime in an effort to reduce the effects on the mines.

To contain the economic shock, the Zambian government has to make tough decisions on monetary and fiscal policy aimed at containing inflation, and stabilizing the exchange rate, such as increasing domestic revenue (through tax hikes), and reducing external debt. Such policies may have political implications, as they will directly affect the general public. For example, the government raised the electricity tariffs in November 2015 only for the President, Edgar Lungu to reverse them in January 2016 due to public pressure about the increased cost of living.

History indicates that economic crises can have adverse effects on the political landscape of a country. The obvious consequence would be a decline in political support of incumbents, in some cases, brings forth increased political opposition and social protests and unrest. The challenge then is the decisions by the leaders and the security forces about the use of force in response, as this can have effects on the intensity of protests as well as the security forces' integrity or on their future careers if the opposition was to win elections.

In Zambia the economic shock has increased the political opposition and social protests. The police have been used to halt the opposition using the Public Order Act by using force to disrupt opposition gatherings so that they fail to organize their parties and mobilise supporters. Students’ protests have been met with strong force by the police. Even the rioting miners who were laid off or put on forced leave were not spared from police brutality. Police officers that were believed to have been soft on the opposition were retired on grounds of national interests.

It is not clear whether the strong use of force by the police will lead to more unrest. But it is obvious that police integrity has been lost, and more violent attacks are expected months leading to the 11 August 2016 general elections. The major opposition seem to be gaining support in areas where they were not popular, especially the Copperbelt region, where miners lost jobs due to the reductions in copper production as a result of a 30 percent reduction in power supply to the mines and the reduced demand for copper by China. The increased rate of riots by miners and students especially, shows the lack of confidence in president Edgar Lungu, since the riots at Luanshya mine for instance, happened at the time when President Lungu was visiting the province to address the problems with the mines.

On 5 January 2016, President Edgar Lungu signed the Amended Constitution, whose major political highlight in the electoral system and process is the presidential running mate clause and the 50+1 clause (the winning presidential candidate must receive more than fifty percent of the valid votes cast). The previous election winners since 2001 have never garnered more than 50 percent of the votes. As such, the 11 August 2016 general elections will be difficult to predict, especially with the effect of a presidential running mate likely to also determine the direction of votes and given the existing economic crises. However, it’s vital to point out that the major opposition have a huge chance to win given how narrowly (1 percent) the ruling PF candidate, President Lungu won against UPND`s Hakainde Hichilema in the January 2015 presidential by-elections.
投稿者 Admin 時刻: 7:54 PM 0 コメント