Just the Bad News: Reporting on Peace Operations in the DRC

“No news is good news” – so goes an old adage. But it does not necessarily apply to the reporting of conflict in Africa by media corporations from beyond the continent, for no news does not necessarily mean an absence of bad news. It often simply means that the media corporations have decided that the events on the continent (both good and bad) are not worthy of reporting.

By the same token, if a recent study by the author is any indication, on the not-so-common occasions that issues related to conflict and peace in Africa are reported, it is indeed the 'bad' news that gets the coverage. The study in question involved measuring the coverage by the New York Times of peace operations in the Democratic Republic of Congo (DRC) over the course of the thirteen years since it was established. The coverage was measured by a word count. The results can be seen in the figure below. 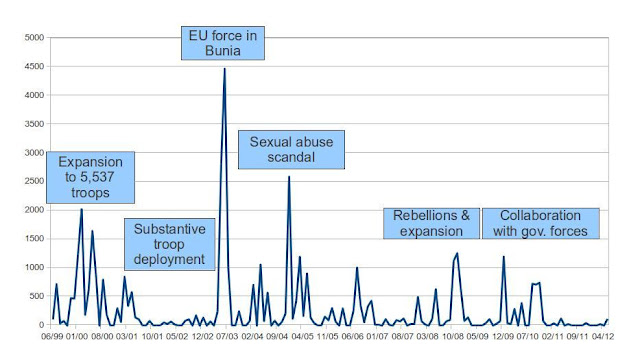 There was some coverage of the UN Mission in the Congo (MONUC) when it was established by the UN Security Council in 1999, and more in 2000, particularly as it encountered difficulties in deploying because of obstacles on the ground. But as conditions changed, allowing their deployment in full, and as the peacekeepers began fanning out across the country in early 2001, coverage virtually disappeared – good news simply wasn't news.

It would be two years before the New York Times would show any interest in covering the peace operations in the DRC again. This time, massacres in the Ituri district led to the possibility (and realization) of intervention by a small French-led European Union force. A combination of the massacres and the deployment of Western troops in response got the attention of the newspaper, but not for long. The EU force would only stay for three months (MONUC would remain), but coverage lasted for little more than one month – the situation had calmed in the town in which the forces were deployed. This was as concentrated as coverage of peace operations in the DRC would ever get.

More bad news – a scandal involving sexual abuse perpetrated by some peacekeepers – attracted a reasonable degree of attention more than a year later. Between 2008 and 2010, peacekeepers' failures to stop rebel advances, and their dubious collaboration with government troops accused of human rights abuses also was the object of some coverage, but not that much. Coverage has since flatlined.

Since peace operations began in the DRC, there is no question that there have been numerous negative occurrences worthy of reporting, but there have also been positive achievements made in helping keep a very fragile region from falling apart altogether. This also equally deserves our attention.

At the time of writing, rebels are at the gates of the eastern city of Goma again, and MONUC's successor, the UN Stabilization Mission in Congo (MONUSCO) is using helicopter gunships in an attempt to halt their advance. We hope that the New York Times will not simply continue its tradition of reporting the bad news and little else. More importantly, we hope that further violence can be averted, leaving the newspaper with no more bad news to write about.
投稿者 Admin 時刻: 3:14 AM