The Other Conflict: Covering Eastern DRC

Never mind that the Democratic Republic of Congo (DRC) hosts the world's deadliest conflict today, or that the current levels of violence are the worst seen there in the past five years. Whatever its status or state of affairs, the conflict, the country, and the region are going to struggle to attract any substantive levels of media coverage from the outside world.

This sad reality reflects entrenched patterns in terms of the various factors that editors and producers use to help them decide what they think is newsworthy and what is not. These include race, socioeconomic status and perceived national/political interests. Being poor, black and outside the range of vital national interests of the world's powerful countries certainly does not help. Central Africa's chances of getting attention are not good at the 'best' of times.

Since mid-November, this is precisely what has happened. Unfortunately for the people of eastern DRC (though perhaps fortunately for those leading the offensive and their backers), the rebel (M23) assault on, and capture of, the major city of Goma, has coincided almost perfectly with the conflict over Gaza. This has effectively ruled out the possibility of any substantive media-led concern, indignation or interest regarding the fate of eastern DRC and its people.

Let us first let the figures speak for themselves. The following graph shows the levels of coverage in the New York Times (including both online and print) in the one week leading up to the fall of Goma to the rebels. 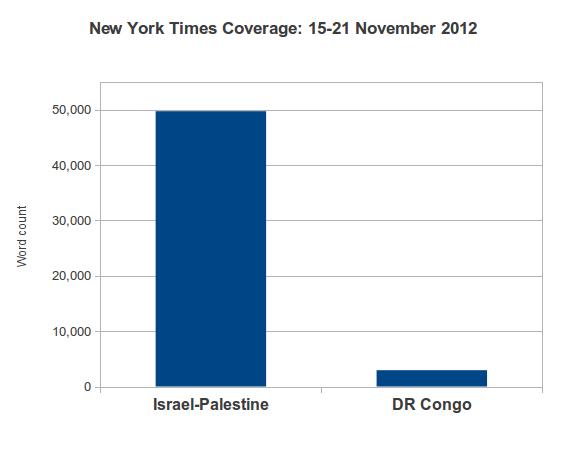 And this yawning gap in coverage, this terribly disproportionate level of interest, certainly does not just apply to the New York Times. It is a trend that applies to the news media globally, both online and off.

Any incidence of conflict in Israel-Palestine is automatically newsworthy, for a number of reasons, most importantly elite political interest in powerful Western countries. It is clear that factors such as the death toll or level of humanitarian suffering are unlikely to feature in a major way in the decisions in response to foreign conflict made by policymakers in these countries. But it is shameful that these factors do not feature either in decisions made by media gatekeepers regarding newsworthiness.

Is it too much to ask that the decision-makers in media corporations tone down their deference to elite interests a little, shake off some of the urge to ignore the plight of those whose skin and/or passports are of a different colour from their own, and take a new and fresh look at the state of the world?
投稿者 Admin 時刻: 6:06 PM