South Africa and the Islamic State

This past week, South African media and social networking sites paid a great deal of attention to a story emanating from Cape Town. A 15-year-old girl was taken off a British Airways flight on her way to join the Islamic state. South Africa’s State Security Minister David Mahlobo confirmed that the country’s intelligence services were investigating the manner in which the girl was recruited and how she managed to obtain funds to pay for the airfare.

The shock and surprise accompanying the announcement was, however, unfathomable. Six weeks earlier, in February 2015, one newspaper broke the story that members of an Eastern Cape family sold their home to join IS. In November 2014, meanwhile, the Daily Maverick reported of how an 18-year-old South African from Johannesburg using the pseudonym of Abu Huraya al-Afriki was fighting with IS and making use of various social media platforms to recruit other South Africans to join the jihadist cause of “Caliph” Abu Bakr Al-Baghdadi – the IS leader. 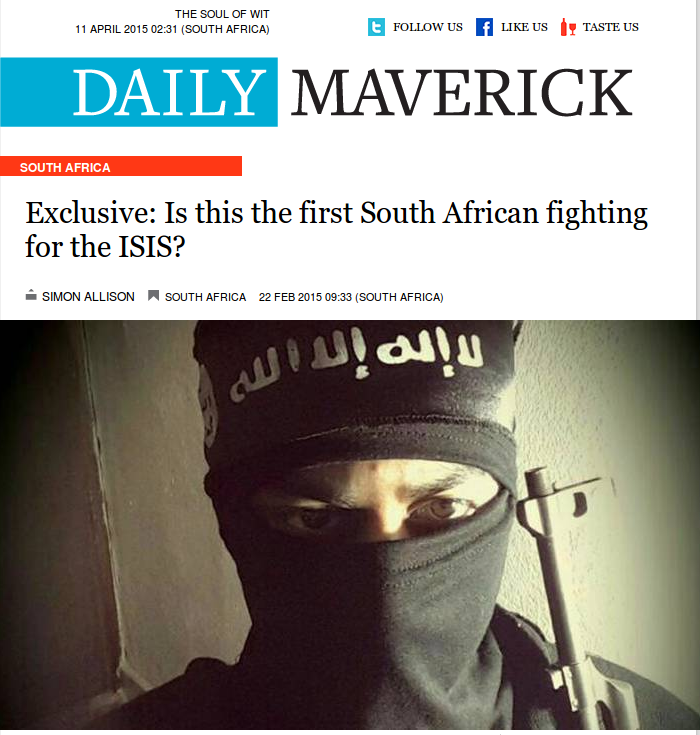 These are not isolated incidents. Indeed one estimate puts the number of South Africans fighting for IS at 140. According to Iraq’s Ambassador to South Africa, three South African IS members have already been killed in the fighting. All this points to the ideological appeal of IS together with their tech-savvy social media propaganda and their military successes on the ground (IS controls an area the size of Britain in Iraq and Syria). This ideological appeal was captured by Abu Hurayra when he stated, “I joined the Islamic State because their aim is to establish the word of Allah (There is no God, but Allah) as the highest, and the word of Kufr (disbelief) as lowest, and this is what Allah tells us in the Qur’an to do. So, it is a compulsory duty upon all the Muslims around the world to join the Jihad, although many of them are misguided and Allah did not choose them…”. The danger for South Africa as developments in Libya and Tunisia testify is when those who return from the Middle East establish sleeper cells in their home country.

The astonishment of the South Africa’s security services to this development is shocking given the fact that 15,000 people from 80 countries have already flocked to the IS banner. More importantly, given recent developments in Australia, Canada, Paris, Libya and Tunisia as well as with Nigeria’s Boko Haram aligning itself with IS, one would assume that Pretoria’s securocrats would have understood that the country is not immune from these global developments. Moreover, given South Africa’s history with radicalism – one would have expected South Africa’s security forces to be on high alert. By 1997, for instance, both Hezbollah and Al Qaeda had established a presence in the country. By the early 2000s, reports of various jihadi paramilitary camps inside the country as well as in neighbouring states, more specifically, Mozambique came to light.

On a more positive note, various Muslim clerics and organizations are now condemning the barbarism which is the Islamic State. At the same time, many of these like Shabbier Ahmed Saloojee, the principal of Zakariyya Park madrassa in Johannesburg are receiving threatening calls for their anti-IS stance. It is a troubling development when moderate Muslims are intimidated from speaking out against the radicals and does not portend well for the future.
投稿者 Admin 時刻: 9:58 AM