Zimbabwe’s Watershed Moment After the Axing of Vice-President Mnangagwa

A country once called the breadbasket of Southern Africa has constantly failed under the autocratic leadership of President Robert Mugabe. His disdain for his own people was demonstrated when President Mugabe sacked his popular long-serving Vice President Emmerson Mnangagwa. Mnangagwa was seen as a leading contender to succeed President Mugabe and his removal appeared to clear the way for the First Lady, Grace Mugabe, to take over. Mnangagwa’s dismissal follows a familiar pattern. The former Vice President Dr. Joyce Mujuru was dismissed as a result of false accusations of not being loyal to Robert Mugabe and wanting to overthrow him. Similar charges were levelled at Mnangagwa.

Hailed as the military mastermind of the 1970 war against settler-colonialist forces of the Ian Smith regime, Mnangwana, gained tremendous popularity within the ranks of ZANLA, the former military wing of the Zimbabwe African National Union, ZANU. We’re not talking about a peace-time hero here but a war veteran who spent more than 10 years in prison for fighting against colonialism and a freedom fighter that proved his endurance during difficult times by passing important examinations for his junior law degree whilst incarcerated. As a result, Mnangagwa’s popularity and subsequent dismissal raises questions as to Zimbabwe’s future stability. 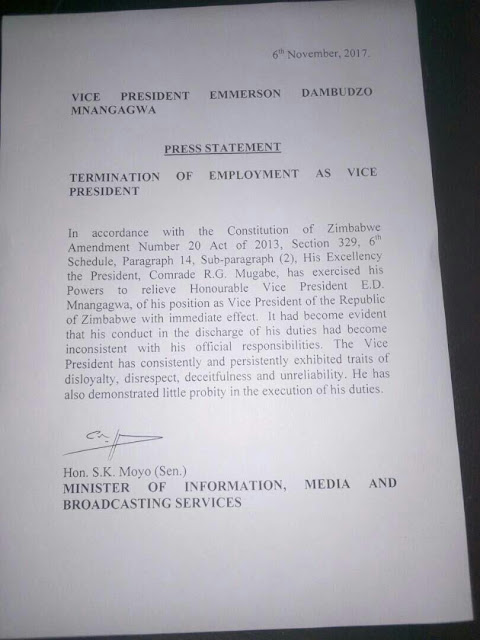 Why was Mnangwana fired just now?
Mnangwana is one of the few public servants who has served as a minister since the first administration in 1980, as a Minister of State Security, to the Ministry of Defence, Rural Housing and Social Amenities, Speaker of Parliament and again Minister of Justice before being appointed Vice President three years back by President Mugabe. Being loyal, committed and performing from 1980 surely we cannot accept the lame excuse given by the Information Minister Simon Khaya Moyo, “It had become evident that his conduct in the discharge of his duties had become inconsistent with his official responsibilities,” who announced the dismissal. Mnangwana is an extremely experienced bureaucrat who cannot be recalled from office without concrete evidence or at least a formal investigation. The question is, why is the Vice President displaying undesirable conduct 37 years in the same government he helped to build?

The context is important in dispelling the official narrative that the loyal Vice-President was incompetent and therefore needs to be dismissed. On 12th August 2017, Emmerson Mnangwna was reportedly poisoned during the Zanu-PF rally in Gwanda which is in the southern part of Zimbabwe. On his return to his office on the 19th August, rumors were spread that he was planning to take power ‘unconstitutionally’. These rumours were allegedy spread by top ranking members of the ruling party including Mrs Grace Mugabe. The level of infighting within ZANU-PF is intimately related to post-Mugabe succession politics. As the spokesperson of the opposition People’s Democratic Party (PDP) asserted, Zanu-PF is, "simply a group of cannibals who feast on each other's political blood."

What does this mean to the political future of Zimbabwe?
Democratic structures are grossly undermined and political insurrection is inevitable. We see an institutionalization of the Mugabe dynasty in the same pattern as we have witnessed dynastic succession in same as we saw it entrenched in North Korea and Gabon. Speculation is rife that Mnangagwa’s removal is part of the elaborate plan to get the First Lady to succeed her ailing husband. Zimbabwe is at the brink of total political collapse and the destruction to come will reduce the country to a kleptocratic dictatorship maintained only by state repression. The future of the country looks increasingly abysmal and socio-economic recovery is unlikely to be achieved.

What should Zimbabweans do?
The masses of the people should start participating in the country’s politics, especially during local and national elections. The people of Zimbabwe are their own saviors and should take their voting powers seriously. To avoid what happened in the 2008 rigged national elections they should fully participate in the electoral processes – and not boycott them. This includes campaigning for a democratic dispensation, fixing their accountability structures and casting and counting of votes. Sacrifices are unavoidable, the regime will victimize some citizens but they cannot stop the collective will of the people as we witnessed during the Arab Spring. Zimbabweans should take control of their destiny or suffer the consequences of complacence in a kleptocratic dictatorship.

The international community were wrong-footed with Mnangagwa’s ouster. Western countries, in particular, supported Mnangagwa on account of his proposed business-friendly policies. The international community should speak with one collective voice and exert pressure on Harare to ensure that any future poll is free and fair – so that the voice of ordinary Zimbabweans are heard.