Political Stability and FDI in SADC: A Love-Hate Relationship

Foreign direct investment (FDI) is undoubtedly one of the most important factors for economic advancement in developed and developing economies alike. So what determines the levels of FDI flows into a country or region? Natural resource availability is one key factor that previous studies have identified, but so is political stability, with the assumption being that investors look for a stable environment in which their investments can be protected and nurtured. In this sense, the importance of regional blocs such as SADC in enhancing FDI flows to the region cannot be understated, especially in view of the assumption that in addition to expanding the size of the market, regionalism can promote political stability by restricting membership to countries with democratic political systems, as well as provide carrot-or-stick type of incentives for member countries to implement good policies.

The following are some of the key results of an academic study attempting to identify the relationship between political stability and FDI in SADC. The full details of the study can be accessed in an article in the Southern African Peace and Security Studies that was recently published.

To test the effects of political stability within SADC, a sample was assembled containing data for all 15 SADC members for the period 1996 through 2014 and the impact of political stability on FDI inflows per capita was investigated, while taking into account other important factors (control variables) such as GDP growth proxying for FDI returns, price levels proxying for investment-related costs, natural resource dependence, inflation etc., selected based on preliminary tests so as not to affect the reliability and validity of the statistical analysis. Political stability was measured using the ‘Political Stability and Lack of Violence’ indicator provided by the World Bank. It is one of the six Worldwide Governance Indicators which capture key dimensions of governance.

The results revealed that there is a U-shaped relationship between FDI and political stability. The lowest point of that U-curve lies at about a value of -1.0 of the PS indicator (the minimum and maximum are about -2.5 and +2.5). Above this level, and especially above 0.0, there is a relatively large, robust and positive causal relationship between political stability and FDI inflows in SADC members. The coefficient increases as the lags increase, showing that the political stability in a country is crucial two to three years before the actual investment happens, which is understandable considering the long-term nature of and the bureaucracy surrounding FDI projects. Using a different cutoff of -1.0 yields even more staggering results – for every one unit of improvement in political stability, there is an FDI inflows within a country.

The results confirm the findings of previous studies and cannot be said to constitute any exciting news. What is surprising, however, is that for the observations below the abovementioned -1.0 cutoff point, these implications do not hold. These observations were seen in the case of the DRC, Angola, and in certain limited periods (mostly around the time of land reform) in the case of Zimbabwe.

Why is the DRC different? 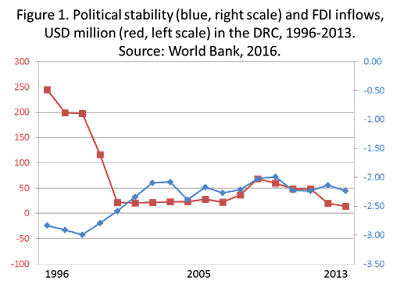 A careful look at the geography of FDI there suggests that there might be no relation between political stability and FDI in the DRC to begin with. The DRC is the largest country in SADC, and its largely underdeveloped infrastructure obstructs quick coordination among its already largely economically, linguistically and ethnically different parts. This line of thought would render the analysis of the DRC as a single politico-economic entity counterintuitive to say the least. What could be described as the economic powerhouse of the country is in essence a relatively small region bordering Zambia, situated in the Katanga Province which itself is home to a mere 6-7% of the population but could be said to account for upwards of 70% of the DRC’s total exports (primarily copper and cobalt). Approximately the same amount of the FDI flowing into the country should be expected to be concentrated in the region. The region has been largely unaffected in a direct way by the conflict in the country, which has taken a heavy toll on the North and South Kivu provinces.

To support the claim that political stability is not the most relevant factor in investment decisions in the mining sector in the south, a backward interpretation of the Fraser Institute survey was considered. According to this survey, the DRC’s political environment was picked out as a major negative factor influencing FDI - over 50% of investors surveyed the said it was a deterrent to investing in the country’s mining sector. While this is certainly true, one does have to look from the opposite angle and recognize that for almost 50% of investors the policy environment is not a major issue. At least not in comparison with other factors, such as corruption and infrastructure problems, which were both found to be a deterrent to 100% of investors (compared to only 50% for Zambia, for instance). Furthermore, whereas political stability turned out to be a major concern for approximately 80% of investors, only half of them (40%) reported they would not pursue any investment in the DRC. The reverse reading of the survey results is very much in line with the explanation outlined in the previous paragraph.

Why is Angola different? 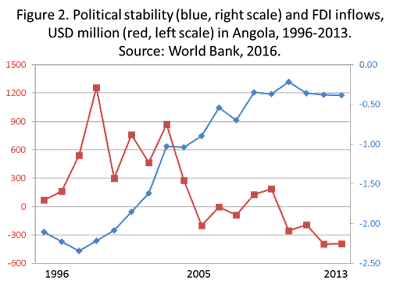 The case of Angola is the only one where an unambiguously negative relationship between PS and FDI be observed (Figure 3). Angola is the only other severely natural-resource dependent country in SADC alongside the DRC, and specifically, it is oil-dependent, being the only OPEC member within SADC. The overwhelming part of FDI in Angola goes into the oil sector, which accounts for more than 90% of the country’s exports. The number of oil extraction wells more than doubled between 1993 and 2003. In light of the fact that FDI in the oil sector depends mainly on the discovery of reserves and on global demand for oil, it is not surprising to see huge fluctuations in FDI flows, including outflows due to falling demand in recent years despite constantly improving political stability. The most relevant part of Angola’s dependence on oil, however, is the geography of its oil extraction industry, very much in parallel with the DRC’s mining sector. As much as 98% of Angola’s oil is pumped from fields offshore, in the Atlantic Ocean, so there is almost no direct contact between the oil industry and the onshore political and social development. Since any potentiality of political violence is virtually non-existent, it follows logically that there should be no relationship between the political stability indicator and the FDI inflows.

Are Angola and the DRC really part of SADC?
Natural resource dependence and the lack of relationship between FDI and political in Angola and the DRC are not the only characteristics that differentiate them from the rest of the SADC members. The two countries, together with the Seychelles, are the only ones which do not participate in the SADC Free Trade Area established in August 2008 (SADC, 2012). As a result, they are not as deeply integrated into the community, with tariffs, regulations and visas limiting their participation in cross-border value chains, FDI and joint-venture projects. To illustrate, FDI outflows from South Africa to other SADC members were examined. South Africa is an FDI powerhouse not only in the region but in Africa as a whole, and a lot of FDI in SADC members originates from South Africa. The DRC and Angola are the only countries which did not experience an increase of FDI from South Africa since 2000. In fact, DRC does not even report any FDI originating from that country. Curiously, apart from South Africa, no other African country reports FDI in either the DRC or Angola. On the other hand, apart from some negligibly minimal investments in neighboring Mozambique, South Africa and Zambia, Angola and the DRC do not invest in SADC members. The overwhelming part of FDI in the DRC originates from Belgium and China, and in the case of Angola, the main contributors are France, Norway, Portugal, the USA, China and Brazil. Considering this, one would wonder whether the DRC and Angola are economically part of SADC, or for that matter the African community at all.
投稿者 Admin 時刻: 5:27 PM