Lesotho’s rule of law and judicial independence under threat: attempts to politicise the Judiciary

Lesotho is a sovereign democratic kingdom. This denotes that the country, through constitutional provisions, acknowledges, encourages and protects civilian rule, and human rights and freedoms. Moreover, it further encourages and commits itself to the principles of separation of powers. The principle and/or doctrine of separation of powers is of importance within the constitutional framework of a democratic state, and it entails a strict separation of the functions, duties and responsibilities of three main branches of government (i.e. legislative, executive and the judiciary), in which state functions are allocated to distinctive institutions with a defined means of ‘competence’ and ‘jurisdiction’. This is evident in the nature and organisational structure of government. As such, the country’s constitution subsequently encourages and enhances ‘judicial independence’ in an effort to ensure ‘judicial review’.

The notion of judicial review enables the judicial branch, particularly the courts, to supervise the legislative and executive branches when they appear to exceed their authority; provide for effective checks and balances in the separation of powers; protect human rights and freedoms; and, invalidate laws and decisions that are incompatible with a higher authority. Both judicial review and judicial independence, which are made possible by the strict separation of powers and an adherence to constitutional provisions, emphasise the importance of the politics-law divide, and the need to maintain such a divide.

However in recent years, Lesotho has witnessed persistent breach of ‘separation of powers’, with either political branch of government (i.e. legislative and/or executive) attempting to politicise the judicial branch of government by dominating and dictating its operational work. The increasing blatant and brazen attacks of Lesotho government on courts, particularly the office of the Chief Justice, serves as an example of this. This growing attempt by government to influence judicial administration and decision-making is more and more becoming a norm subsequently undermining the principle of separation of powers, rule of law and threatening the safety of judicial officers.

And any attempt to challenge and address this phenomenon is failing due to the fact that the Lesotho Law Society, which in most part is expected to defend and protect the independence of the Judiciary, is gradually becoming the surrogate of any government of the day. As a result, this subsequently threatens the rule of law vis-à-vis judicial independence. Therefore, any successful domination of judicial administration and decision-making by the executive will ultimately question short, medium and long-term adequacy and legitimacy of judicial proceedings, rulings and/or verdicts etc. Moreover, this will be detrimental to the country’s judicial review processes. The Law Society and the Judiciary are the custodians of the constitution, and the assurance of constitutionalism (i.e. the practice of a limited government ensured by the existence of an effective constitution). And such an effective constitution can only exists when government institutions and political processes are effectively constrained by constitutional rules.

It goes without saying that in a democratic state, especially one which has obliged to conform to international human rights, judicial independence is of a national rather than any specific political party and/or organisations’ interests. In addition, the judiciary is entitled by law to run its own affairs in an effort to adequately promote and protect human rights among other aspects.

In both the 2012 the All Basotho Convention (ABC), Basotho National Party (BNP) and Lesotho Congress for Democracy (LCD), and the 2017 ABC, Alliance of Democrats (AD), BNP and Reformed Congress for Lesotho (RCL) coalition governments respectively with Tom Thabane as Prime Minister, the executive has been seen and accustomed to attempting to influence and dominate legal and judicial decision-makings. On more than one occasion, the Thabane-led administration has taken upon itself to directly decide on the appointments, tenure and decision-makings of the Judiciary and judges. And this has had negative implications on Lesotho’s judiciary and commitment to protecting human rights.

Firstly, on the 15th January 2015, PM Thabane unlawfully appointed Kings’ Council (KC) Kananelo Mosito as the new President of the Court of Appeal. A decision which was later nullified during the subsequent 2015 PM Pakalitha Mosisili-led coalition government due to Thabane’s administration being deemed a “caretaker government” which therefore made this appointment unlawful.
Following the dissolution of Lesotho’s parliament on the 5th December 2014, it was decided by the electoral agreement (i.e. the Maseru Facilitation Declaration) that that coalition government will only act in its capacity as a “transitional or caretaker government” pending the 28th February 2015 general snap elections to eventually determine a legitimate government. It therefore meant that, Thabane’s government in its status as a caretaker government, failed to abide by the powers and functions of a caretaker or transitional government by making prominent appointments during this period, and therefore breached the electoral code. This immensely threatened the possibility of holding elections and placed dire ramifications on the country’s judicial system.
The consequences for such an appointment included the resignation of four foreign Court of Appeal judges, that is, Justice Doughlas Scott, Justice Craig Howie, Justice Wilfred Thring and Justice Roger Cleaver, on the 30th January 2015, reducing the country’s apex court to only two South African judges, namely, Justice Winfred Louw and Justice Ian Farlam. However, the appointment of Mosito failed.

Nonetheless, domestically, regionally and internationally, this dealt Lesotho’s integrity a heavy blow. Moreover, Thabane’s actions and related outcomes of meddling with the judiciary formed part of other underlying political issues (i.e. poor leadership, and tensions and misunderstandings that occurred between coalition partners) that led to the 2015 collapse of his government which was only in office for 2 years. His government was replaced by another coalition government (i.e. the Democratic Congress (DC), LCD, Marematlou Freedom Party (MFP), Basotho Congress Party (BCP), National Independent Party (NIP), Lesotho People’s Congress (LPC) and Popular Front for Democracy (PFD) led by PM Pakalitha Mosisili. Similarly, this government collapsed at the backdrop of a no-confidence vote in Mosisili with only 2 years in office. And this led to the 3rd June 2017 elections which witnessed Thabane at the helm of government again. 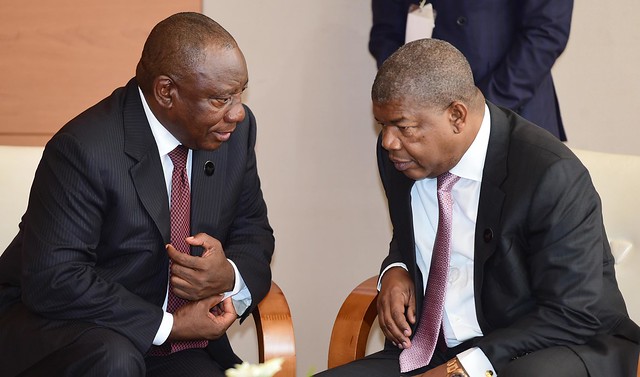 And secondly, on the 27th April 2018, barely a year in his presidency, Thabane sought to recommend, through a ‘show cause’ letter, for the suspension of Chief Justice Nthomeng Majara (i.e. Chief Justice of Lesotho since 2014 and the first woman to hold this office in Lesotho’s judicial history) over allegations of misconduct ranging from corruption to failure to preside over cases and an alleged plot to assist the opposition in toppling the government among others. This decision witnessed the support of the Minister of Law Lebohang Hlaele who is coincidentally married to Thabane’s daughter, ‘Mabats’oeneng Hlaele. Moreover, this move saw the support and threats from some cabinet ministers, principal secretaries and public demonstrations by individuals referred to as “Hands off Mosito” campaigners – who demand an urgent swearing in of Mosito as President of the Court of Appeal.

However, these distinctive but yet interrelated incidents cannot be isolated. Two things are certain and evident. On the one hand, Thabane highly intends to appoint Mosito as President of the Court of Appeal, while enabling him influence and absolute control over judicial decision-making on the other hand. Two behavioural phenomenon are common with the domination of the executive over judicial admiration. Firstly, by controlling and/.or influencing judges and/or judiciary translates to influencing the judicial judgments, agenda and general decision-making. In many instances, this often leads to “totalitarian governance” which tends to result in unchallenged and persistent cross violation of human rights and freedoms. And secondly, governments, particularly the President in a presidential government and/or the Prime Minister in parliamentary government, tend to use this influence to ultimately change the structure, nature and provisions of the constitution to extend their tenure in government. Essentially both these behavioural phenomenon often threaten human rights and freedoms, and restrict citizen participation vis-à-vis regular electoral processes.

The intensity of attempts to politicize the Judiciary, and the subsequent detrimental threats to judicial independence and the rule of law in the country eventually led to the 7th May 2018 intervention by the “Southern African Chief Justice’ Forum (SACJF)” and the “International Commission of Jurists (ICJ)” in an effort to protect and maintain judicial independence as per the principles of separation of powers. The SACJF has made calls on the government to uphold the independence of the judiciary arguing that matters relating to judiciary vis-à-vis judicial office bearers need to be handled in accordance with the law (i.e. constitutional provisions, principles of natural justice and due process).

According to Justice Peter Shivute, SACJF chairperson and Namibian Chief Justice, “the matter needs to be handled in accordance with the law and in a way that preserves the independence, integrity and dignity of the courts and one that reinforces rather than undermines the principles of separation of powers and the rule of law”. In addition, the ICJ has become critical over the slow pace of judicial reforms in Lesotho which is seen to be detrimental to the administration of justice. ICJ’s African director, Mr Arnold Tsunga, “reforms are critical in addressing ongoing problems within the judiciary….the leadership must realise that reforming the judiciary is of national rather than of political party interests”.

In June 2018, various Commonwealth judicial bodies additionally gave support to Justice Majara in an attempt to nullifying the allegations and reasons by the government to have her ousted from office. Moreover, this move aims to protect Lesotho’s judicial independence, judicial officials, and preserve the credibility and legitimacy of the rule of law by restricting the restructuring of the judiciary which is seen to be politically motivated. These bodies include the Commonwealth Lawyer Association (CLA), the Commonwealth Legal Education Association (CLEA), and the Commonwealth Magistrates and Judges Association (CMJA). Their joint venture to maintain an apolitical judiciary in Lesotho is a result, mainly, of Lesotho being a former British colony, and a current active member of the Commonwealth.

These judicial bodies have issued a joint statement which is also in support of the stance and remarks made by the SACJF in particular. They jointly argued that “any measure on the part of the Executive which is capable of being seen as eroding the independence and impartiality of the judiciary is a matter of serious concern and will erode public confidence in the legal system as a whole”.

These interventions were intended to preserve the politics-law divide. It is evident that the threat posed by the executive to Lesotho’s judiciary independence is not only a domestic concern, but also a regional and international one. And these bodies, especially the African Judges and Jurists Forum (AJIF), have went as far as to actively participate in the ongoing political, security and judicial reforms in Lesotho.
投稿者 Admin 時刻: 10:42 AM